Brenda Gantt is a retired American teacher who has enjoyed great success in her 70s. She became famous after a video she made on her Facebook page preparing biscuits went viral. Since then, she has grown to over 2.5 million followers and millions of views on her videos.

Brenda is 75 years old, and her net worth is estimated at about $1.5 million. She is an internet celebrity and earns massively from her Facebook and YouTube channels. In addition, Brenda Gantt has a cookbook, “It’s Gonna Be Good, Y’all’ that features 100 recipe ideas. And apart from the recipes and sharing cooking videos, she runs a bed and breakfast in Andalusia that attracts worldwide visitors who come to have a taste of her delicacies. 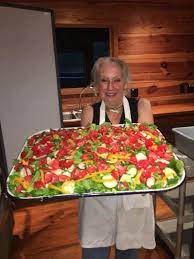 How Much Is Brenda Gantt Worth?

Brenda Gantt’s primary sources of income are Facebook and YouTube, which pay an average of $10 for every 1000 views for food-related content. It’s no surprise that her net worth is estimated at $1.5 million because Gantt gets millions of views for every video she makes. Moreover, her income is bound to increase as she is actively publishing viral news videos.

To expand her audience, Brenda Gantt has started an Instagram handle with similar content to her Facebook page. She currently has 190k followers. Her cookbook costs $34.95 and an additional $5 for shipping and other applicable tax.

Brenda was born in 1947 and moved to Tuscaloosa, where she grew up since she was four. She graduated from Tuscaloosa County High School in 1965 and pursued her bachelor’s degree at Livingston Stone University.

Brenda Gantt had a successful career as a teacher in the United States. She spent most of her teaching time at Northport’s Tuscaloosa County High School. She also taught in different schools in Covington County until she retired.

The famous internet cook recognizes her mother as her greatest inspiration for her love for cooking. Brenda Gantt says her mother was a great cook and would occasionally have her help out in the kitchen.

Brenda had been married to George Gantt until 23rd September 2018, when he died at 72. They wedded in 1968 and spent 50 years of a happy marriage. Brenda says they were always together and kept a garden as a couple. They both loved antiques and always collected them.

Brenda and George Gantt had two children, a boy and a girl, who currently have their own families and have given them 5 grandchildren.

Before her fame, Brenda had a Facebook page with 500 followers, mostly frequented by close relatives and friends. In 2018, she decided to record a video baking some cookies and posted it on her page so her followers would see how she did it. To her surprise, the video gained a million views. Brenda thinks that her followers shared the video until it went viral, and after that, she earned a massive following.

Brenda Gantt says she was excited and shocked that her video had reached 1 million views. Since then, she has transitioned her cooking on YouTube, where she regularly posts her videos to showcase different recipes she makes.

In September 2020, Brenda made an appearance on Kelly Clarkson Show.

Gantt is charming and has a distinctive style that entertains her audience. She gives her cooking instructions while still giving her views about life and religion.

Brenda is a devoted Christian and has prepared over 200 meals for her church group. She loves to give back to society and uses social media to help businesses thrive. Reports have it that she has saved many women-owned companies from shutting down.

This favorite internet cooking grandma is credited for her infectious and inspiring dialogue during her cooking videos. And for this reason, she increasingly transforms her viewers into followers, subsequently increasing her popularity and growing her net worth.

Brenda gained social media fame by sharing videos of her delicious Southern recipes. She promises her followers to teach them how to prepare America’s old times dishes that used to be prepared by their grandmothers.

Brenda’s top most famous recipe is her buttermilk biscuits recipe which has millions of views. All her videos are 30 minutes long and attract national attention. Brenda shares personal stories to inspire her audience besides her useful cooking tips.

Though Brenda had accumulated most of her wealth during her teaching days, social media has given her massive popularity as a grandmamma. Her hard work and enthusiasm have helped her get a net worth of $1.5 million. Brenda is committed to staying close to her family and updates her followers on Instagram about her life while sharing cooking videos and personal life experiences.